She turned from the window

And she spoke to me, softly,

I could not hear the words

But I could see her lips moving.

The morning came and I went to the window I dreamed of,

I looked out at the garden and the ocean beyond.

White waves on a blue ocean.

When she was here with me,

I would walk all day

And make up stories to tell her at night.

One day she told me she didn’t like the story I had told,

The woman in the story was too beautiful

And that made her sad.

She was gone the next day.

She had tied a red scarf to the apple tree by the gate,

It whipped in the wind

A meteor dashing in the night sky

moving for a million years

until smashing into a sun.

Rainwater in the gutter,

flowing down the drain

under the busy road.

A man moving down mirrored halls

glancing at the marble figures

Dreams leap and run and die.

happy with all he has

and desperate to gain more,

but his weak heart explodes.

You can’t take it with you.

A girl stands on a street corner

and clutches a metal pole,

and another cold heart.

A new bookstore opened in town a few weeks ago

And I went in today.

The radio was tuned to Classic FM.

I looked through the books; they were expensive

So I bought one.

And she spoke loudly so everyone could hear.

“A poet has to be able to read their work aloud to audiences,

Writing is not enough

A great poet in a great actor.”

And scurried home to write some poems

I found a chair for sale and because it matched one already in my house, I sent a message to the owner and asked to buy it. That was fine. It would be held for me, all I had to do was come around and pick it up. The chair would cost me sixty dollars.

That’s fine. I travelled into town and went to where the lady lived. A semi rural area where the houses are set apart on wide blocks and a lot of open space around. I went to the front door. The verandah was fenced off and there were a dozen small dogs hysterically throwing themselves about and barking. I stood on the front steps ten feet away from the front door so I could not knock, but the dogs were making enough noise the neighbors came out and gave me strange looks.

Finally the lady who owned the house came out and she was very friendly. A very kind woman, very welcoming and warm, she knew I was there to collect the chair. She told me to come in and the dogs would not bite me. I opened the gate and came in suddenly a three legged dog lunged toward me and locked its jaws around my shin bone. Its teeth sunk into my skin and it held on. I stood there in shock, automatically I wanted to kick the dog and send it hurtling off the verandah but I did not want to hurt it (not in front of the woman anyway). She yelled at the dog and then whacked it on the head and it released me, looked guilty for a moment and then came back to bite me again but I managed to get inside the house and escape.

She brought out the chair and I paid for it. It is a beautiful chair and in very good condition and I told her so. She was pleased to hear this and then she showed me some other antiques she owned, each of them being of high quality. Then we came to a brand new sideboard. It had lead light windows in the front doors but one of the panels was cracked.

“I found that for free on the street.” She said, “and I know how to lead light so I will be able to replace the glass. When I found this, it was in two pieces. I managed to screw it back together.”

“Some what.” She said, “But as you can see I not too handy with the house work, my house is such a mess.”

Silence. She went quiet and I went red in the face. 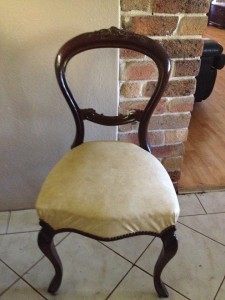